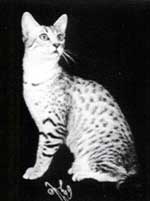 Section I. Types of membership

A.        Voting membership shall be open to individuals over age 16 years of age who meet all of the following requirements.

2.       are either actively showing an Egyptian Mau in CFA (a minimum of 4 times in the previous 12 months in Regions 1-8, or 2 times in the International Division), OR are eligible for the Egyptian Mau Breed Council;

These members are entitled to vote and hold office.  All voting members who are currently breeding or planning to breed Egyptian Maus must agree to abide by the G.E.M.S Standard of Ethics (GSOE). Potential members must have a Voting Club member in good standing as a sponsor.

Associate members cannot vote or hold office.  All Associate members who are currently breeding or planning to breed Egyptian Maus must agree to abide by the GSOE. Potential members must have a Club member as a sponsor.

1.        Provisional members have the same rights as associate members.

3.        Provisional members are eligible to be voted on for conversion to Voting Membership following one year of club participation.  Approval by 2/3 of voting members is required.

A.   Excepting Charter Members, each applicant for voting membership will, if accepted, serve one year as a Provisional Member, having the rights of Associate Membership during that period.

B.      Each applicant must be sponsored by a voting club member in good standing.  This sponsor shall both determine that the applicant has a clear understanding of the Club Constitution, By-laws and GSOE; and offer guidance and answer any questions regarding the Club.  The sponsor is also responsible for introducing the potential member to the club and asking for a vote on membership.

C.      The applicant must complete and forward to the Recording Secretary an application for membership, along with a signed copy of the GSOE and an application fee of $20. Member acceptance must be put to vote once an eligible member has completed the application process.

D.      The sponsoring member will present the applicant for a member vote via e-mail.  A 2/3 favorable vote by voting membership shall constitute acceptance as a Provisional Member for one year, with the right to be considered for Voting Membership at the end of that period. All votes will be forwarded to Recording Secretary.

E.       Once applicant is accepted, the application fee will be applied towards annual dues.

- Copy of the Constitution and By-laws.

G.       Each applicant agrees to abide by the G.E.M.S. Constitution and By-laws, as well as the GSOE and the rules of CFA.

A.       Voting Members as defined in Section I, A. are entitled to one vote.

B.       Associate members are not entitled to vote.

We will not have regular meetings as defined by Roberts Rules. Club participation shall be defined by the following list.

Club Participation shall be defined by

The G.E.M.S Annual meeting may be held at the GEMS annual show, or another major CFA event such as the International, the Annual meeting, a major cat show, or a mutually agreed upon location as determined by the Board.

A.      A quorum for the transaction of business will consist of 50% of the Board of Directors plus two voting members.

C.      No person may serve as proxy for more than one Director.

D.      The Board of Directors may transact business by phone or electronic mail when in-person meetings are impossible.  All directors must be polled.

A.       All members shall be entitled to attend regular and special meetings and participate in discussion.

B.      Voting at meetings shall be limited to the Board of Directors and Voting Members.  Items up for vote will be presented at the meetings and approved for forwarding to the list.  Members will be notified that items are on poll and deadline for final votes will be set. Routine member vote will be by poll or via email list, while maintaining the options to conduct voting in person, by mail, or by signed facsimile.  In case of time sensitive emergencies the Board of Directors will have discretion.

C.      The Board of Directors may meet in executive session via e-mail, telephone, in person, or any combination of these three methods at the President’s discretion to address confidential items.

D.      The President or the Board of Directors may submit items to a membership vote that may be taken at a regular meeting or on the e-mail list.

E.      Determining G.E.M.S. ballot for CFA Officers and Directors elections shall be by membership vote.  The G.E.M.S. ballot will be cast reflecting the candidate for each position receiving the most votes.  In the case of a tie, the Board of Directors shall determine which of the tied candidates is marked on the ballot.

The President shall appoint the Elections Committee of at least 30 days prior to the election deadline.  This committee will name a chairperson, and shall be responsible for putting together the ballot, tabulating the votes, and relaying results to the Board.

A.      The committee must include a member who is not currently up for election.

B.      The Elections Committee, with the assistance of the President, will solicit a candidate for any position that would otherwise remain vacant.  Nominations, including self-nominations, will be accepted from Voting Members.

C.      The Elections Committee is responsible for checking the eligibility of each candidate.

D.      The committee is responsible for putting together the ballot and distributing it to the membership via e-mail or regular mail at least 10 days prior to the voting deadline.

E.      All elections and other membership votes, unless otherwise provided for by the Constitution or By-laws, shall be decided by a simple majority of the valid ballots returned.

F.      Results of membership votes shall be reported to the President as soon as possible and no more than two weeks after close of election period. The President shall inform the members of the election results.

A.      Voting Members in good standing as of May 1 of the election year are eligible for candidacy.

C.     An Officer or Board member of another active CFA Egyptian Mau Breed club may not simultaneously serve as an Officer in G.E.M.S.

B.      Only voting members in good standing may nominate or vote. Dues must be current, and are due by May 1 for the next membership year (July 1 through June 30) to be in good standing.

E.      If possible on or before June 1, the Elections Committee shall send ballots with voting instructions, to all members holding voting membership, allowing ten days for return of the ballots.  Ballot may be sent via mail or e-mail and/or be made available on-line.

F.      Each ballot must be signed by the voter, or come from that person’s “recognized” e-mail address. A signed facsimile copy is acceptable.

G.     Members so desiring may cast write-in votes as long as the write-in candidate meets the eligibility requirements and agrees to fulfill the responsibilities of the office if elected.

H.      All ballots must be returned to the designated member of the Elections Committee.  The Elections Committee will tabulate the votes and inform the President, new officers and newsletter editor of the results at the annual meeting and/or no later than two weeks after the voting deadline.

A.      All resignations shall be submitted in writing to the President or the Board of Directors.

D.       serve as ex officio member of all committees;

F.       submit a message to the general membership in each issue of the newsletter.

The recording secretary shall:

A.     serve as the recording officer;

B.     maintain club records and files, including all minutes, reports from meetings, and publications;

D.      serve as point of contact for new members through the following actions:

3.        tallying and reporting results of votes for new members; and

4.        forwarding to new members copies of the Constitution, By-laws, GSOE and a current membership list.

The Corresponding Secretary shall:

A.     serve as the Corresponding Officer;

B.     serve as the contact person for CFA; and

B.     maintain records of all receipts and expenditures;

C.     open and maintain a bank account in the name of the club;

D.     supply financial reports for meetings, reports and correspondence; and

E.     collect dues and renewals, maintaining and providing to the recording secretary a list of current members with dues status for the purpose of sending renewal notices and determining voting status.

Board members shall each:

A.       be responsible for communication within their appointed regions;

B.       act as liaison between appointed regions and the president;

D.       collect information from members and prepare a report for each issue of the newsletter;

E.       encourage new members and attempt to increase membership in their appointed regions; and

F.       act on charges brought against members of the Club and have the power to terminate membership based on the provisions of Article VI.

B.       Amount of Dues shall be determined by the Board of Directors.

C.       Members shall pay their dues to the annually no later than May 1st for July 1- June 30 th membership.

D.       Members not paying their dues within two months of the due date will be dropped from the rolls and deleted from the e-mail list.  Such members shall be reinstated after full payment of their dues for the current membership year.

E.       Any member whose dues are in arrears will not have voting privileges until payment is received.

A.      Upon written charge filed with the Recording Secretary and President, by one or more members in good standing, the Board of Directors shall have the power, by a 2/3 vote, to reprimand, suspend or expel from membership any person who, after a fair hearing of both accuser and accused, shall be found guilty of violating a rule of the club, or of a fraudulent or dishonest act, or of conduct detrimental to the interest of the Club or the Fancy at large.  The hearing may be held in person, or via e-mail or telephone.  No anonymous or oral complaints will be considered.

B.      A copy of the charges, plus a date, time and method of the hearing must be provided to the accused and the Board at least two weeks in advance of the hearing

C.     The accused can request an open hearing in writing to the Secretary and the President seven days prior to the hearing.

D.     The accused can appeal the ruling of the Board to the membership of the club at the next regular meeting of the club. A 2/3 vote of the members present shall be binding on all parties provided that there is a quorum present.

These By-laws may be amended by a vote of the eligible membership.  Proposed changes must be noticed on the G.E.M.S. e-mail list at least 30 days prior to balloting deadline.  Ballots shall be tallied no more than 2 Weeks after the close of balloting deadline.  Any proposed amendment must be approved by a 60% majority of the votes received from the eligible membership.