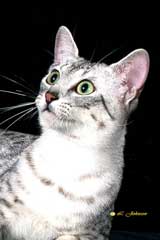 This year GEMS collaborated with Sign of the Cat Fanciers in Easton, PA. In addition to the wonderful new venue, vednors, gate, and fabulous cats, we were lucky enough to spend to with close friends and celebrate the year's accomplishments in this end-of-season extravaganza! We had seven kittens, eleven adults including four lovely grands, and six cats in premiership competing, for a grand total of twenty-four Egyptian Maus, representing 13 different catteries!

A very speial congratulations to our Highest Scoring Egyptian Maus in show!